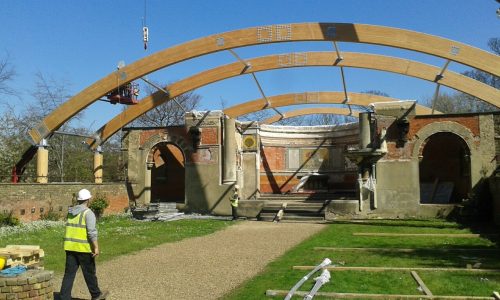 The gates at St George’s Garrison Church have received a national award, it was announced at the National Heritage Ironwork Group’s 10th annual conference held at the Victoria and Albert Museum. Designed by Peter Preston of Manifest Design and unveiled by HRH The Duke of Gloucester at a special service of dedication, the gates won the prize for Best New Ironwork Design in a Heritage Setting in a competition organised by the National Heritage Ironwork Group, coming top of 22 projects.

Peter Preston said, “The inspiration behind the design is the poem In Flanders Field by Lt. Col. John McCrae, which describes the poppies growing between the crosses marking the graves of the fallen. It also describes the larks singing and flying in the sky above the guns below.

The poem, and the poppy it describes, have since become the remembrance symbol for soldiers who have died in all conflicts.  Consequently, the decoration of the base of the gates is conceived as an architectural ‘trophy’, incorporating the 9lb gun from the Royal Regiment of Artillery’s Cap Badge.

Above this, the design diffuses into a wild flower ‘meadow’ composed of poppies, cornflowers and forget-me-nots. Poppies are widely recognised as the remembrance flower of the Commonwealth Countries, whereas the cornflower or ‘Le Bleuet de France’ is the national symbol of remembrance in France.

The forget-me-not is the (unofficial) symbol of remembrance in Germany.  In this way, the composition acknowledges the 100th anniversary of the end of the First World War (and the first Armistice Day) in 2018; and that whether friend or foe, every life lost is worthy of remembrance. Towards the top, two gilded larks will be concealed in the foliage – something that it is hoped visiting school groups might enjoy looking for, and which will enable the gates to be used as a teaching resource and engagement with local schools.”

To find out more about the project to save the beautiful mosaic panels of St George’s, which was all but destroyed by a V1 flying bomb in World War II, see our project page.